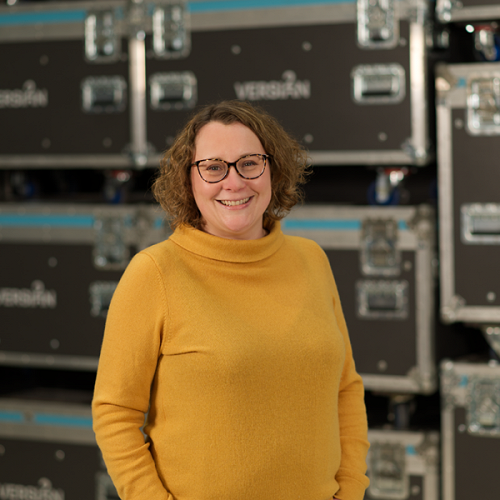 Television lighting specialist Version 2 has appointed Kelly Cornfield to the position of Sales Director at their Reading operation.

Graduating with a degree in Live Event Technology, Kelly began her career at the Vari-Lite warehouse in 2002 (later VLPS). After a year out travelling in New Zealand, she returned to the warehouse, since acquired by PRG, and moved to an office role, working under Project Manager Mick Healey on prestigious events from the Robbie Williams’ 2006 World Tour to the 2009 Eurovision Song Contest in Moscow.

Cornfield went on to focus on the TV market covering numerous “amazing” shows including the Brit & MTV Music Awards, X Factor, Britain’s got Talent and more recently The Masked Singer which was “a total joy to be involved with.”
Over the last twenty years she worked her way up the ranks through Assistant Account Manager, Account Manager then Account Director and ultimately Head of TV and Film at PRG.

It was Kelly’s love of live music that kicked off her interest in working in live events.
It’s rare she doesn’t fit a live gig into her week.. “90s music usually, old school bands like The Charlatans and Ocean Colour Scene!” But it was watching REM at Glastonbury that sealed the specific tech decision. “The lighting was so brilliant to me at the time that I switched from a sound engineering to a live performance technology course at Derby University.” The choice, she confesses, had practical advantages too, “I was so short I could never see anything on stage – but I could see the lights!”

At Version 2 Kelly is looking forward to focusing on the market she is most experienced in and more,
“Version 2 has a really good feel. I’m excited about helping grow the company and working as part of a tight team on TV productions and it will be great to be involved with live sports too.”
But at the end of the day, says Cornfield, it all comes down to good relationships. “Everything is about people.”

As Sales Director at Version 2, Cornfield will be working at their Reading operation on a growing number of prime-time TV shows and live music and sporting events.

Version 2, MD Nick Edwards comments “We are delighted that Kelly has chosen to join the Board of Directors. For me, without doubt Kelly is the leading Account Manager in the light entertainment television sector.”

An enthused Edwards concludes: “Following on from Nigel Wray’s investment, our recent appointments represent another significant milestone in the continued evolution of Version 2.”