NEWS / The BRITs Are Coming 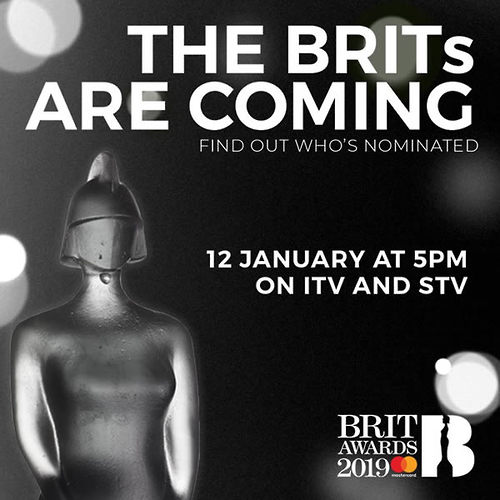 On 12 January on ITV, Clara Amfo hosted ‘The BRITs Are Coming’ – a one hour TV special which exclusively revealed the nominations for The BRIT Awards 2019, reflecting on yet another incredible year for British and international music.

Alongside the shortlist reveal, including the highly sought after Mastercard British Album of the Year, the show featured exclusive performances by some of the UK’s most exciting music acts: Little Mix, George Ezra, Jess Glynne, Not3s & Mabel, and the winner of the 2019 Critics’ Choice award Sam Fender, who will be presented with his award on the show.

One of the UK’s most formidable girl groups, Little Mix have achieved five UK Top Ten albums and 13 Top Ten singles, making them one of the UK’s biggest selling girl bands of all time. Winning ‘Best British Single’ at the 2017 BRITs for ‘Shout Out To My Ex’ where they also performed, they recently released their fifth studio album ‘LM5’ which included the hit single ‘Woman Like Me’ featuring Nicki Minaj.

George Ezra has had a phenomenal year; scoring his first single in the UK, Ireland and Australia with ‘Shotgun’, taken from his second studio album ‘Staying at Tamara’s’ which followed his debut ‘Wanted On Voyage’ to No. 1 in the UK Album Charts, and becoming the best selling artist album of 2018. A BRIT nominee, he launched his successful George Ezra & Friends podcast series earlier this year with guests including Ed Sheeran, Elton John, Lily Allen and Niall Horan all taking part over the past few months.

Jess Glynne burst onto the scene as a featured artist on No. 1 singles for Clean Bandit and Route 94 but has since established herself as one of the UK’s best selling artists, with her two albums hitting the top spot in the UK, and a string of hit singles including ‘Hold My Hand’, ‘I’ll Be There’ and ‘All I Am’, becoming the first British female artist to have seven No. 1 singles in the UK singles chart.