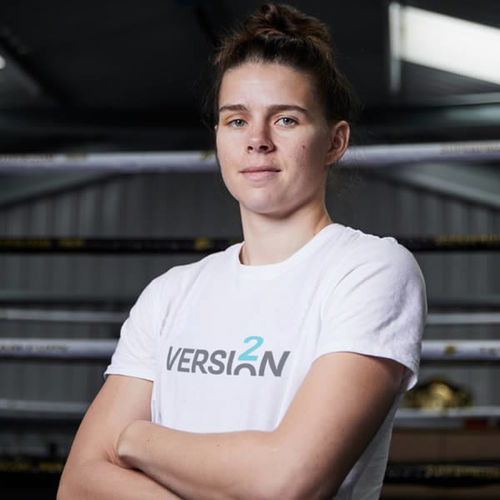 Version 2 are proud to be sponsoring WBO World Champion Boxer Savannah Marshall for 2021.

Summarising an awe-inspiring career (thus far) is a challenge! Savannah discovered boxing at 12 when she joined the local Hartlepool Headland club after seeing a boy showing off his trophy in the street, she decided there and then, she wanted one! After a childhood of sparring with boys, an illustrious amateur career followed, including winning a World Title in China in 2012. Savannah then became a member of the Team GB Boxing squad, representing Great Britain at London 2012, and Rio 2016 Olympics. In 2014 she took Gold at the Commonwealth Games in Glasgow.

Savannah turned professional in 2017, signed by US legend Floyd Mayweather Jr. and subsequently made her pro debut in Nevada, USA. After returning to the UK later that year, she linked up with her long term trainer Peter Fury, and in 2019 she secured a promotional contract with industry leaders Matchroom. At the end of what was an uncertain year in 2020, Savannah became WBO middleweight World Champion defeating Hannah Rankin at Wembley Arena to take home the coveted belt!